"Be the best you can be. Then get better."

The boss of space, Captain Marvel, civilian name Carol Danvers, is a character you could first recruit to your academy during the A-Force Event. Her Recruitment Quest is Get Captain Marvel! Her Mission Board Quests can be found here.

Each time Captain Marvel is upgraded, her Power Level increases.

Captain Marvel's Rank 1 outfit is a red and blue vest with a starburst on it. She has blue pants and red shoes.

Captain Marvel's Rank 5 outfit is a blue bodysuit with a red neck, gold starburst on the chest, red sash around her waist, and gold piping. She wears red knee-high boots, long red gloves, and a red mask covering half of her face.

Captain Marvel requested Inferno by name to join a new team of young super heroes she was building.

Captain Marvel worked with J. Jonah Jameson in order to find out what happened at the Cosmic Conservatory and what Director Fury was hiding.

Captain Marvel worked with J. Jonah Jameson to uncover the fact that Fury imprisoned students in the Cosmic Conservatory. He told her that he did it to protect everyone.

Star-Lord flirted with Captain Marvel when she joined the Academy, but she rejected him.

Captain Marvel is voiced by ??? 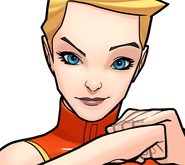 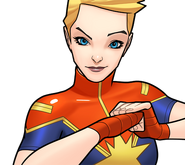 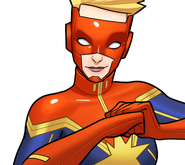 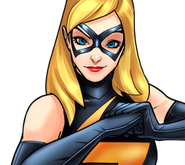 Cosmic Captain Marvel
Add a photo to this gallery
Retrieved from "https://avengers-academy.fandom.com/wiki/Captain_Marvel?oldid=58777"
Community content is available under CC-BY-SA unless otherwise noted.