"Captain Britain will be your champion, now and forever! Just don't call me old bean..."

Hero of Britain, Captain Britain, civilian name Brian Braddock, is a Premium Character you could first recruit to your academy during the British Invasion Event. His Introductory Quest is Greetings from America! His Mission Board Quests can be found here.

Captain Britain was never released for combat in Avengers Academy 2.0.

Captain Britain's Rank 1 outfit is a British flag sweater over a white button-up shirt. He wears brown jeans with a belt and dark brown boots.

Captain Britain's Rank 3 outfit is a red, white, and blue sweater unbuttoned over a red shirt with a yellow lion symbol on it, jeans with a belt, and black shoes. He also wears a British flag scarf and a red mask over his eyes. 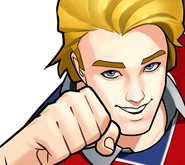 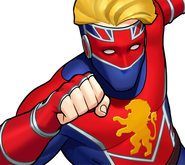 Captain Britain Rank 5
Add a photo to this gallery
Retrieved from "https://avengers-academy.fandom.com/wiki/Captain_Britain?oldid=58350"
Community content is available under CC-BY-SA unless otherwise noted.