"Nothing can stop us as long as we work as a team. And if you have to bring your phones, at least put 'em on vibrate."

Each time Captain America is upgraded, his Power Level increases.

Captain America's Rank 1 outfit is a denim jacket over a light blue shirt with his shield logo on it. He has jean pants with some pouches, and red sneakers. His shield is on his back.

Captain America's Rank 3 outfit is midway between his casuals and his suit. He is wearing an armor with the 'Star' symbol on his chest and his chest muscles are quite visible. His jeans no longer have pockets, and he wears gloves and boots.

Captain America's Rank 5 outfit is a red, white, and blue armored bodysuit with a brown utility belt, brown gloves, brown boots, a helmet, and his shield worn on his back.

Even Ares can't push Captain America any to train any harder than he already does.

Agent 13 may have romantic feelings for Steve. It has been seen that they have a flirtatious relationship.

When Roberta came through the time gate to Avengers Academy, Steve helped her break her conditioning and discover her Captain America 2099 alter-ego.

Baron Zemo has a bizarre fixation with Captain America, and it makes him feel inadequate.

Enchantress has said Steve reminds her of a "Midgardian Thor", and tried to mind-control Steve, but she failed.

Steve and Tony are good friends, despite their disagreements. The Civil War Event tested the bonds of their friendship, but they made it to the other side as a team once more. Tony helped Steve campaign for class president. They even go on a flirty study date in Uncivilized, Pt. 3 while trying to compromise over a similar argument they had during the Civil War event. He also described Steve as annoyingly perfect.

Killmonger attempted to recruit Captain America to his army, but he refused to join

Steve and Peggy Carter were friends back in the war, and they renewed their friendship shortly after her arrival. They go dancing together on more than one occasion in Peggy's quest line.

Wasp flirted with Steve, but he didn't reciprocate.

Steve and the Winter Soldier used to be best friends, and Steve is trying to help Bucky retrieve his memory. Steve says that Bucky is also 'Captain America'.

Captain America In the Quad

Captain America dancing the Charleston at Club A 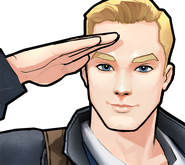 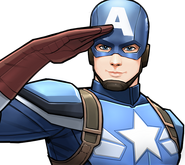 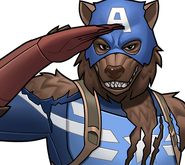 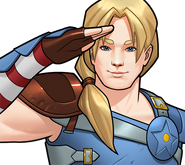 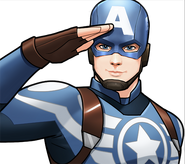 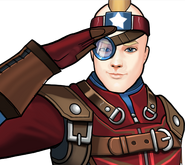 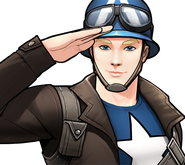 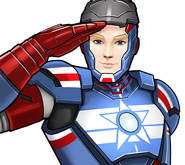 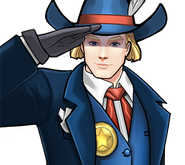