"If I wanted to talk to you, I wouldn't be in these shadows."

Each time Black Widow is upgraded, her Power Level increases.

Natasha's Rank 1 outfit is a red long-sleeved shirt, a black short sleeved cropped jacket, ripped black jeans, black boots, and her widow's bite gauntlets. She is also wearing a red necklace in the shape of an hourglass.

Natasha's Rank 3 outfit is a black mid-length jacket over a red shirt, a silver belt, black pants, black boots, a red hourglass necklace, her widow's bite gauntlets, and a black utility pouch on her left thigh.

Natasha's Rank 5 outfit is a black bodysuit trimmed with neon blue lines, the red black widow symbol on her chest and belt, thigh holsters, and her widow's bite gauntlets.

Black Widow confronted Nick Fury yet again about the secrets he's hiding, and he finally confessed that he's from an alternate universe. He told her about the fate of the Prime Universe, and everything he knew about the Avengers Academy universe.

Natasha almost admitted that she enjoys training with Steve.

Black Widow helped the Chitauri Soldier fit in and adjust to Earth, starting with the proper way to hold a weapon.

Black Widow questioned Cosmo about how he became telepathic, and the head of Knowhere Security. He refused to tell her, and she respected him for guarding his secrets.

Black Widow breaks the news to Dum-Dum Dugan that he was killed on a mission fifty years ago, and that he's now a Life-Model Decoy.

Amora is mean to everyone at the Academy, including Natasha. Natasha has admitted that she doesn't hate Enchantress as much as she should.

Natasha is vaguely threatening towards Sam, as she is towards everyone. Sam insisted on joining Natasha to infiltrate a Hydra base. The mission seemed too easy and he confronted her, saying she either really hates him or really likes him and wants him to be her boyfriend. She gave him an evasive answer, not committing to either. Later, they went on a date at Club A, but Black Widow implied that it was for her own purposes against Fury. After Falcon got upset, she admits that her supposed reasoning may have not been true. Later, after Falcon goes on a study date with Ms. Marvel, Natasha appeared to be jealous.

In all his years exploring the multiverse, the Grandmaster never met anyone as genuinely apathetic as Black Widow.

Clint and Natasha used to date. According to Clint, they broke up because he's "an idiot." Even with the end of their relationship, Kate tells Natasha that Clint can't stop thinking and talking about her. After Clint joins Avengers Academy, Wasp swears that she's never seen Black Widow smile more.

When Clint's hearing aids break, Natasha was frustrated with him for feeling sorry about himself instead of fixing the problem. Afterwards, she told him how much his bad attitude and refusal to let others help bothered her. She then partnered up with him to help regular people with everyday problems.

Tony flirted with her a lot, but she turned him down. She once went on a fake date with him, but admitted at the end it was only to find out information, and she didn't have romantic feelings for him.

Black Widow and Jemma Simmons bond over their admiration for Peggy Carter.

Loki and Natasha worked together on various missions, and according to Wasp, there might be something else going on there.

Black Widow and Misty Knight previously teamed up to fight assassins in Harlem.

Black Widow doesn't trust Fury and believes he's hiding something from them. He finally told her his secrets during the Infinity War Event.

Black Widow is Red Hulk's favorite Avenger because she's so quick to resort to violence in order to get what she wants.

Natasha asks Singularity for help finding Thanos. When this draws Thanos' attention, Natasha promises to protect her from him. Singularity calls Natasha her "scary friend."

When Viv questioned how to form friendships, Black Widow advised her that it's important to be self-confident enough to be comfortable with or without friendships.

Janet seems to have a bit of a crush on Natasha, as she frequently comments on how cool Natasha is.

Natasha is voiced by Alison Brie. 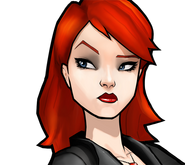 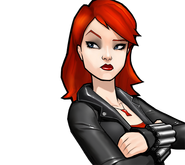 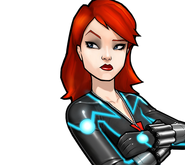 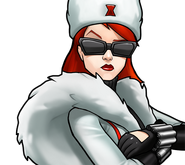 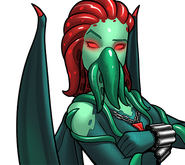 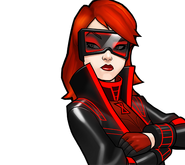 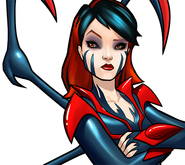 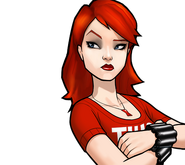 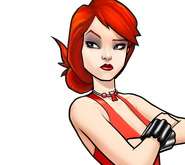 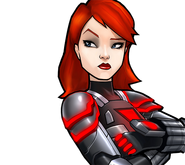 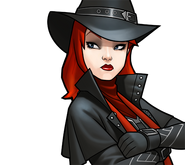 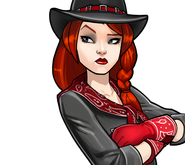