The international smuggler Klaw has convinced all of Wakanda's enemies to join forces and attack at once. Black Panther and Wakanda's greatest minds and warriors must team up with the Avengers to save the world!

Wakanda and the Avengers Academy come together against a new common enemy: Ulysses Klaw. Klaw hopes to pilfer Wakandan tech – surprise, surprise – and the shake-up caused by Thanos might just give him the opening he needs.

How to Play Edit

Unlock new characters to battle Klaw and the Tribal Warriors, and increase the amount of Dora Milaje Spears you can produce.

Certain fights on the event battle maps will award materials you need to unlock new outfits!

If you get 45 stars on this map, you will instead receive the Diamond Black Panther Trophy!

Note: You will only receive the highest earned trophy at the end of the event. 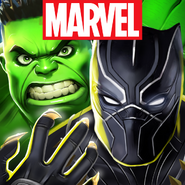 Event Icon
Add a photo to this gallery
Retrieved from "https://avengers-academy.fandom.com/wiki/Black_Panther_Event?oldid=50345"
Community content is available under CC-BY-SA unless otherwise noted.