"I've come to learn everything I can about the outside world, and return the knowledge for the good of Wakanda. I will also be purchasing many souvenirs..."

Prince of Wakanda, Black Panther, civilian name T'Challa, is a character you could first recruit to your academy during the Civil War Event. His Recruitment Quest is Prince of Wakanda, Pt. 2. His Mission Board Quests can be found here.

Each time Black Panther is upgraded, his Power Level increases.

Black Panther's Rank 1 outfit is a gray shirt with a black vest and black pants. He has an orange striped scarf draped around his neck, black gloves tipped with sharp gold claws, and a golden panther necklace.

Black Panther's Rank 3 outfit is a black utility uniform with armor plates on his chest and shoulders, an orange striped sash tied around his waist, elbow-length black gloves with gold claws, and his gold panther necklace.

Black Panther's Rank 5 outfit is a black body suit and panther cowl that covers him from head to toe. The gold panther necklace is built into the bodysuit, and the suit has white accent marks.

T'Challa respects Black Widow, and they are good friends.

Loki tried to nickname Black Panther "Dark Leopard", but reversed his decision when he saw how seriously T'Challa takes the mantle.

Okoye is very loyal to Black Panther and the leader of his bodyguards, the Dora Milaje. She joined Avengers Academy to protect him.

Black Panther is voiced by ???

Black Panther in his cell during the Civil War Event

Black Panther Rank 3
Add a photo to this gallery 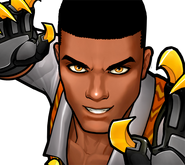 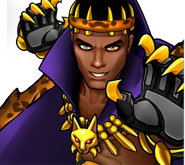 Royal Black Panther
Add a photo to this gallery
Retrieved from "https://avengers-academy.fandom.com/wiki/Black_Panther?oldid=59880"
Community content is available under CC-BY-SA unless otherwise noted.