"As long as the Ebony Blade blazes darkly in my hand, I must fight on! No matter how late I am to class!"

Wielder of the Ebony Blade, The Black Knight, civilian name Dane Whitman, was first introduced as an antagonist. He could later be recruited to your academy after his defeat during the British Invasion Event. His Recruitment Quest is Ancient Wisdom. His Mission Board Quests can be found here.

Black Knight was never released for combat in Avengers Academy 2.0.

Black Knight's Rank 1 outfit is a short-sleeved black and blue jacket over a black t-shirt with a red hawk symbol in it. He wears loose black shorts with a large black belt and black boots. He also wears a fingerless black and red glove on his right hand.

Black Knight's Rank 3 outfit is red, blue, and black armor with shoulder pads, black and gold helmet, black pants with a gold stripe on each leg, black belt, and black boots. There is a red hawk symbol on his chestplate.

Black Knight's Rank 5 outfit is a full suit of black, blue, red, and gold armor, with a brown cape, and the Ebony Blade slung across his back.

The Academy students fought and freed him from the Black Knight's curse. He later became a student at Avengers Academy.

Black Knight arrives as a Boss 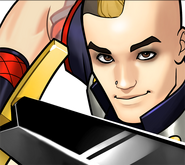 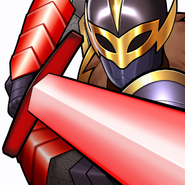 Black Knight Rank 5
Add a photo to this gallery
Retrieved from "https://avengers-academy.fandom.com/wiki/Black_Knight?oldid=58414"
Community content is available under CC-BY-SA unless otherwise noted.