"You can't buy happiness, but you can steal it."

The amazing cat burglar, Black Cat, civilian name Felicia Hardy, is a character you could first recruit to your academy during the Spider-Man Event. Her Recruitment Quest is The Cat's Meow! Her Mission Board Quests can be found here.

Each time Black Cat is upgraded, her Power Level increases.

Black Cat's Rank 1 outfit is a black sweater with a cat face on it and a fur-lined neckline. She wears high-waisted black shorts and calf-length black boots. She also wears a black choker.

Black Cat's Rank 3 outfit is a half-zipped black jacket with fur on the collar. She has white gloves with black fingers, small white boots with black laces, black knee-high tights that become grey at the shorts, and she has a thin chain-link belt across her hips. She also wears a domino mask.

Ant-Man and Black Cat work together to steal the Casket of Ancient Winters.

Black Cat pretends to go on a date with Tony in order to hack into the Stark Towers database.

Black Cat thinks Spider-Man is innocent and wants to help clear his name. She goes out on several dates with Peter Parker.

Recruit Available! Black Cat
Add a photo to this gallery 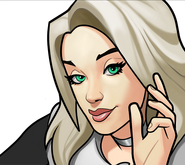 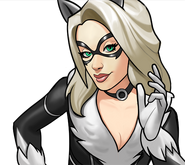 Black Cat Rank 5
Add a photo to this gallery
Retrieved from "https://avengers-academy.fandom.com/wiki/Black_Cat?oldid=57963"
Community content is available under CC-BY-SA unless otherwise noted.