"Cyborg champion of the Korbinites."

Beta Ray Bill is a character you could first recruit to your academy during the Guardians of the Galaxy Vol. 2 Event. His Recruitment Quest is Get Beta Ray Bill! His Mission Board Quests can be found here.

Beta Ray Bill's Rank 1 appearance is a red and blue vest over a black t-shirt, blue jeans, a gold belt, brown boots, and his axe Stormbreaker.

Jane Foster made first contact with Beta Ray Bill, through Thor Corps, before he came to the Academy.

Beta Ray Bill is voiced by ?? 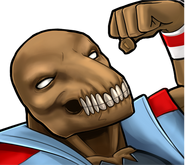 Beta Ray Bill Rank 5
Add a photo to this gallery
Retrieved from "https://avengers-academy.fandom.com/wiki/Beta_Ray_Bill?oldid=59142"
Community content is available under CC-BY-SA unless otherwise noted.