Priestesses of the Sovereign

The leader of the Sovereign, Ayesha, is the primary antagonist in the Guardians of the Galaxy Vol. 2 Event. Ayesha and her Priestesses invade the Academy to try capture the Infinity Gauntlet. Ayesha wants to use the gauntlet to remake the universe in her "perfect" image. During the event, she sent Collector and the High Priestess to battle the students.

She also appeared as an antagonist in the Warriors Three Special Event.

Adam joins the Avengers Academy to stop Ayesha from endangering the universe. He's afraid the Infinity Gauntlet will destroy her soul.

Collector initially worked with Ayesha battling the Avengers in order to obtain the Infinity Gauntlet. After being beaten, he betrays her and joins the Avengers Academy.

Ayesha loves to taunt the High Priestess and regularly insults her. 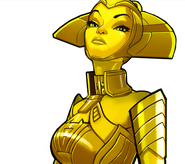 Add a photo to this gallery
Retrieved from "https://avengers-academy.fandom.com/wiki/Ayesha?oldid=56660"
Community content is available under CC-BY-SA unless otherwise noted.