Avengers Stadium is a Building. It is available at Level 15. It is a typical stadium. It has a field with a four lane track and a viewing building with bleachers to the sides of it. At one end of the field there is a digital scoreboard. There are three hurdles stacked up next to one side of the bleachers. On the field, there are two end zones with blue and red Avengers logos. There is also an Avengers "A" logo at center field.

As you upgrade Avengers Stadium, you add to the available action areas. 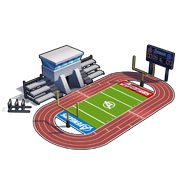 Stage 1
Add a photo to this gallery
Retrieved from "https://avengers-academy.fandom.com/wiki/Avengers_Stadium?oldid=57079"
Community content is available under CC-BY-SA unless otherwise noted.