Avengers Beach is a Building. It was only available to build and upgrade during the limited-time Sun, Surf, and Mischief!. There is a small pool and wave machine, as well as chairs, a sandcastle, and palm trees. The only characters who can interact with this building are Wasp, Loki, and Iron Man—but only if the player bought their event outfits from Van Dyne's during the event. The Avengers Beach takes up 5x6 (30) plots.

As you upgrade Avengers Beach, you add to the available action areas. Only 3 characters total can use this building, and none of their Actions overlap. 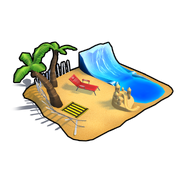 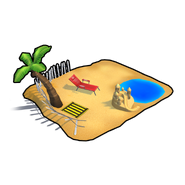 Avengers Beach Stage 1
Add a photo to this gallery
Retrieved from "https://avengers-academy.fandom.com/wiki/Avengers_Beach?oldid=42544"
Community content is available under CC-BY-SA unless otherwise noted.