Attuma is the main antagonist of the Legends Assemble Event. He leads an undersea school for Lemurians.

During the Legends Assemble Event, Attuma agreed to team up his university with A.I.M. and Hydra to attack Avengers Academy. Attuma and his students created a tsunami that flooded the campus, creating chaos, and allowing his followers to kidnap some of the school's faculty.

Triton tried to diplomatically convince Attuma to give him the Terrigen crystals the Lemurians possess. When Attuma refused, Triton led a team to defeat him. 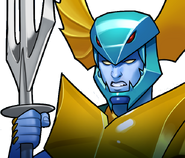 Add a photo to this gallery
Retrieved from "https://avengers-academy.fandom.com/wiki/Attuma?oldid=53876"
Community content is available under CC-BY-SA unless otherwise noted.