Zola seized control of Iron Man's Iron Legion Robots and organized them to attack Avengers Academy. He ordered them to bring him students with powers, particularly Inhumans. With them under his control, he could copy their genetic code and create an army of Inhuman drones.

After learning the secrets of the Pride in Los Angeles, Arnim Zola and the rest of Hydra pursued their children in hopes of offering them to the Gibborim in exchange for power. Zola revealed to Nico Minoru that the Gibborim made her staff and used their technology to give Molly Hayes super strength. 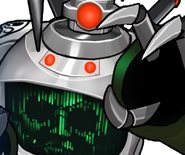 Arnim Zola
Add a photo to this gallery
Retrieved from "https://avengers-academy.fandom.com/wiki/Arnim_Zola?oldid=59014"
Community content is available under CC-BY-SA unless otherwise noted.