"Somebody should get Director Fury a new wallet for his birthday."

Expert thief-turned-superhero, Ant-Man, civilian name Scott Lang, is the ninth recruitable character in Avengers Academy. His Recruitment Quest is Ant-Plan. His Mission Board Quests can be found here.

Ant-Man and The Wasp Event

Each time Ant-Man is upgraded, his Power Level increases.

Ant-Man's Rank 1 outfit is a casual version of his Ant-Man suit. He has a grey baseball cap, a red, black, and grey hoodie, and blue jeans. He also wears pieces of the tech that let him shrink around his neck, on his belt, and on his right wrist.

Ant-Man's Rank 3 outfit is mid-way between the casual look of Rank 1 and the professional look of Rank 5. His jacket is zipped up and clearly padded for protection. His baseball cap has evolved into more of a helmet with antennae on the sides over his ears.

Scott attended a party hosted by Iron Man where Enchantress hypnotized him and Hawkeye into fighting over her.

When Black Widow needed a spy to uncover Nick Fury's secrets, she asked Taskmaster if he knew anyone. He suggested Ant-Man, and Pepper Potts allowed Scott to be recruited to the Academy. Alas, he failed to uncover Director Fury's files, much to Natasha's disappointment.

When Thanos invaded Midgard, Nick Fury led the Avengers in defeating him by collaborating with Mephisto and Hela to secretly replace an Infinity Stone on Thanos' gauntlet. While Hela distracted Thanos, Ant-Man swapped the true stone with the fake one. With the modifications, the Avengers trapped Thanos in the Darkforce Dimension.

Ant-Man and Black Cat work together to steal the Casket of Ancient Winters.

Black Widow specifically invited Ant-Man to the school so that she could have someone check out the secret vaults below Avengers Academy.

Ant-Man and Hank Pym seem to share the same shrinking-growing technology, although Ant-Man tends to only use it to shrink.

Hank teaches Ant-Man how to fly on winged ants, instead of only riding wingless worker ants.

Ant-Man helped the Avengers defeat Thanos by stealing a stone from Thanos' Infinity Gauntlet and replacing it with a fake one.

Like Wasp, Ant-Man also uses Pym Particles to shrink in size. Unlike Wasp, he also controls an army of insects. Ant-Man also has a crush on Wasp.

Ant-Man is voiced by Toby Turner.

First In-Game Appearance Of Ant-Man, during the Beach Event 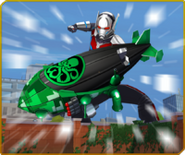 Ant-Man in his Giant-Man costume destroying a HYDRA blimp.
IMG 4529.JPG
Outfit ad
Add a photo to this gallery 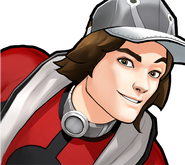 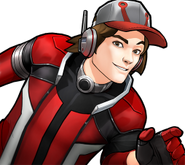 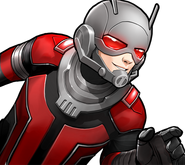 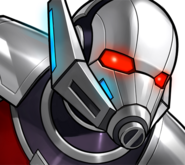 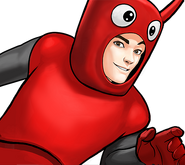 Irredeemable Ant-Man
Add a photo to this gallery
Retrieved from "https://avengers-academy.fandom.com/wiki/Ant-Man?oldid=53539"
Community content is available under CC-BY-SA unless otherwise noted.