Asgard's assassin and Heven's wingless one, Angela, civilian name Aldrif Odinsdottir, is a Premium Character you could first recruit to your academy during the A-Force Event. Her Recruitment Quest is Get Angela! Her Mission Board Quests can be found here

Each time Angela is upgraded, her Power Level increases.

All of Angela's attacks are armor penetrating.

Angela's Rank 1 outfit is a brown vest over a gold mid-riff tanktop, black shorts with a red and tan sash, gold thigh-highs, and brown hiking boots. She wears multiple silver necklaces, silver bracelets, and brown bands around her biceps and left thigh.

Angela's Rank 3 outfit is is a gold mid-riff breast plate, brown shorts with an extra wide brown belt, gold armored boots, brown sleeves, a red and tan scarf wrapped around her neck, gold armored boots, and brown fingerless gloves. On her left arm she wears one gold band and a silver and red wrist guard over grey plated armor. On her right arm, she wears two gold bands over gray plated armor. She also wears a gold headdress with wings on either side.

Angela's Rank 5 outfit is a gold breast plate with brown sashes and dark brown sleeves, with a full-length brown skirt slit up to the waist, an extra wide brown belt, dark brown tights, gold armored boots, a furred cloak with red and tan streamers hanging from it. She also wears grey plated armor wrist guards, and a gold headdress with wings on either side.

Frigga gifted Angela with Siriana of the Aesir's wedding gown, which transforms into whatever the wearer finds most beautiful. In Angela's case it turns into armor. In exchange, Angela insisted she pay Frigga back in some way. Frigga asked her to do a favor for Malekith the Accursed.

Malekith was initially suspicious of Angela wanting to do him a favor, but then directed her to kill one of his old mentors, a wizard, and retrieve his Hunting Horn of the Faerie. Angela balked at killing anyone for him, but Frigga agrees that the wizard is a great threat to Asgard. Angela assembled a team and killed the wizard. When she informed Malekith he demanded she turn over the Horn, and Angela refused. She gave the Horn to Frigga instead, settling her debt.

Frigga gives Angela Siriana of the Aesir's wedding gown as a birthday gift for her last few hundred birthdays.

Angela hates Hela for trapping her girlfriend, Sera, in Hel.

Sera is Angela's girlfriend. She likes to write songs about Angela's adventures.

Valkyrie recruits Angela to her new side team of Valkyries to defeat Hela.

Returning Character! Angela!
Add a photo to this gallery 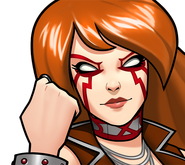 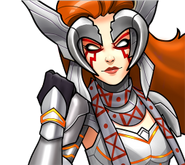 Asgard's Assassin Angela
Add a photo to this gallery
Retrieved from "https://avengers-academy.fandom.com/wiki/Angela?oldid=59630"
Community content is available under CC-BY-SA unless otherwise noted.