"She's beauty. She's grace. She'll punch you in the face!"

Miss America, civilian name America Chavez, is a character you could first recruit to your academy during the A-Force Event. Her Recruitment Quest is Get America Chavez! Her Mission Board Quests can be found here.

Each time America Chavez is upgraded, her Power Level increases.

America Chavez's Rank 3 outfit is a blue sweater with the American flag on it, a red beanie with a star on the front, gold hoop earrings, knee-length black leggings, and red and white sneakers.

America Chavez's Rank 5 outfit is a jean jacket over a red hoodie with the hood up, a blue shirt with a white star on it, black shorts, and red high top sneakers.

America is from the Utopian Parallel. After she joined the Academy, Lady Loki warned her that her home dimension was about to be pulled into the Multiverse, destroying it, and killing her two moms. America turned to Hank Pym for help. With some information from Utopian Parallel scientists, he invented a device and removed the black holes threatening her world. During the process, he hinted that he was unsuccessful in saving the Utopian Parallel in an alternate reality.

Captain America was so impressed by America's bravery, protectiveness for her family and friends, and for fighting with her fists, that he asked her to become "Captain America" for other dimensions.

Loki's nickname for America Chavez is "Asparagus Chavez." He warned her that her home dimension was about to be destroyed, giving her time to save it.

Valkyrie recruits America Chavez to her new side team of Valkyries to defeat Hela. 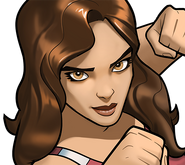 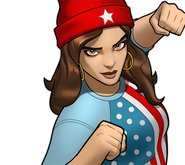 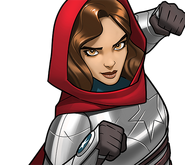 Diver America Chavez
Add a photo to this gallery
Retrieved from "https://avengers-academy.fandom.com/wiki/America_Chavez?oldid=59631"
Community content is available under CC-BY-SA unless otherwise noted.