"The Eighth Smartest Person on Earth. The Strongest There Is. Totally Awesome."

Another Incredible Hulk, civilian name Amadeus Cho, is a Premium Character you could first recruit to your academy during the Monsters Unleashed Event. His Recruitment Quest is Get Amadeus Cho! His Mission Board Quests can be found here.

Each time Amadeus Cho is upgraded, his Power Level increases.

Amadeus Cho's Rank 1 appearance is a white lab coat over a red t-shirt with a black atom symbol on it, black slacks, and a belt.

Amadeus Cho's Rank 3 appearance is his first transformation into a Hulk. He wears a sleeveless, red track shirt with a black atom symbol on it, black running shorts, and red sneakers. He also wears a small bracelet on his left wrist

Amadeus Cho's Rank 5 appearance is still in his Hulk transformation. He wears black and red running shorts with a yellow belt, and his hypermind bracelet. He isn't wearing a shirt or shoes.

Amadeus Cho used to work with Bruce Banner before he became the Hulk. Amadeus absorbed some of the excess gamma radiation, and was able to harness it so he can turn into a Hulk at will. Unlike Bruce Banner, Amadeus retains his intelligence and emotional stability even when in Hulk form.

When Amadeus joined Avengers Academy he experimented with Pym Particles to try to find a solution for dealing with the sudden influx of monsters during the Monsters Unleashed Event. Hank Pym asked him to analyze hundreds of data streams in order to assist Dr. Pym with a problem. After Amadeus took a look at the data, he realized it was all in code, and he questioned why Dr. Pym didn't share his data. Dr. Pym told him he was concealing information for his own good.

While researching Abomination's physiology, Amadeus Cho discovered that in addition to the radiation experiments, government scientists implanted technology in his brain. He shared his findings with Abomination.

Amadeus Cho worked with Bruce Banner before he transformed into the Hulk. Amadeus absorbed some of the Hulk's excess gamma radiation.

Amadeus helped Molly Hayes discover the range of her powers by methodically testing and analyzing her strength.

Hulk and Amadeus Cho
Add a photo to this gallery 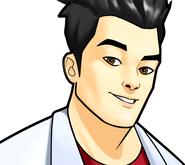 Iron Spider Amadeus Cho
Add a photo to this gallery
Retrieved from "https://avengers-academy.fandom.com/wiki/Amadeus_Cho?oldid=59632"
Community content is available under CC-BY-SA unless otherwise noted.