The only Human to ever control a symbiote, Agent Venom, civilian name Eugene "Flash" Thompson, is a Premium Character you could first recruit to your academy during the Spider-Man: Homecoming Event. His Introductory Quest is Get Agent Venom! His Mission Board Quests can be found here.

Agent Venom was never released for combat in Avengers Academy 2.0.

Agent Venom's Rank 1 outfit is Flash Thompson wearing a black Midtown School of Science and Technology jacket with a white t-shirt underneath it. He also wears black jeans and black running shoes.

Agent Venom's Rank 3 outfit is his symbiote covering his entire body with black symbiote armor except for the fingers and face. He also wears a red belt and a half-mask made out of the symbiote.

Black Widow doubted Flash's ability to control the symbiote until he proves her wrong. Later, she helped Flash save his football team from Project Rebirth forcibly making them symbiote hosts.

Hank Pym taught Flash to help his teammates by pumping the host with a lot of Vitamin C to prevent the symbiote from taking control.

Nick Fury was aware of Project Rebirth, the group that created Agent Venom.

Spider-Man was Flash's classmate at Midtown School of Science and Technology. Flash was a bully and shoved Peter into a locker. When Peter confronted him, Flash said he doesn't do it anymore unless someone really, really deserves it. Flash was also surprised and embarrassed to learn that Peter is Spider-Man, and apologized for his earlier behavior. Later, Spider-Man helped Flash save his football team from Project Rebirth forcibly making them symbiote hosts.

Venom was confused at first over how both of them are Venom. Flash told him not to think about it too much when questioned. Later, Venom, helped Flash save his football team from Project Rebirth forcibly making them symbiote hosts.

Agent Venom is voiced by ???

Agent Venom Ad
Add a photo to this gallery 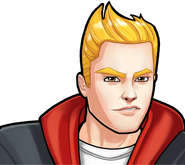 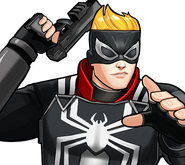 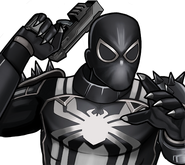 Agent Venom Rank 5
Add a photo to this gallery
Retrieved from "https://avengers-academy.fandom.com/wiki/Agent_Venom?oldid=59633"
Community content is available under CC-BY-SA unless otherwise noted.