"This place is crazy, and dangerous, and everywhere I look someone is trying to kill me. I love it."

Freelance agent, Agent 13, civilian name Sharon Carter, is a character you could first recruit to your academy during the Civil War Event. Her Recruitment Quest is Lucky 13, Pt. 2. Her Mission Board Quests can be found here.

Agent 13 was never released for combat in Avengers Academy 2.0.

Agent 13's Rank 1 outfit is a white and light gray striped T-shirt, with a white trench coat over, and white jeans.

Agent 13's Rank 3 outfit is a skin tight white suit, with a striped shirt under and a dark gray unzipped jacket and a brown belt with a white circle, and silver like gloves.

Agent 13's Rank 5 outfit is a full skin tight suit zipped up with a gun holster on her right leg, and the same belt.

Agent 13 worked with Steve on some missions.

Sharon was captured at some point by HYDRA.

When she was freed from HYDRA by Academy students, she joined Captain America's side in the conflict between him and Iron Man.

Captain America asked Sharon if she had info on any HYDRA students or commanders. Sharon revealed that one of the members of the group that is terrorizing Avengers Academy is Bucky Barnes. She revealed that he was brainwashed by HYDRA to become a deadly mercenary named the Winter Soldier. Sharon then helped Steve free Bucky.

Sharon and Black Widow seem to be on good terms with each other. Sharon once thought Cap had romantic feelings for Natasha.

Sharon Carter worked on a few missions with Captain America. He always wanted to keep her safe, but she always wanted to drag them into something dangerous (not that he needed much convincing!). She seems to be very flirty towards him.

She is Peggy's niece.

Agent 13 is voiced by Linnea Sage

Spider-Gwen waiting to be admitted

Agent 13 Rank 5
Add a photo to this gallery 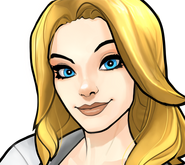 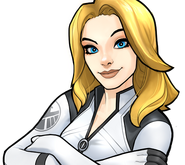 Agent 13 Rank 5
Add a photo to this gallery
Retrieved from "https://avengers-academy.fandom.com/wiki/Agent_13?oldid=59634"
Community content is available under CC-BY-SA unless otherwise noted.