Avengers Academy
Guardians of the Galaxy

"Created to be the Perfect Cosmic Rock God."

Reborn and ready to rock, Adam Warlock is a character you could recruit during the Guardians of the Galaxy Vol. 2 Event. His Recruitment Quest is Get Adam Warlock! His mission board quests can be found here.

Adam Warlock was never released for combat in Avengers Academy 2.0.

Adam Warlock's Rank 1 appearance is an unbuttoned, collared black t-shirt with a gold skull over a red diamond on the back, a red bandana around his neck, gold necklaces, a gold belt, black trousers, gold un-laced combat boots with red socks, red and gold bracers, and a red sash around his waist.

Adam Warlock's Rank 3 appearance is a black jacket with a gold skull and red diamond on the back over a red tunic with a gold lightning bolt pattern and a gold belt. He wears black pants, knee-length black boots, and red fingerless gloves.

Adam Warlock's Rank 5 appearance is a long black jacket over a long red and black tunic with a large gold belt. He wears black pants, black boots, and red and black gloves.

Adam joins Avengers Academy to stop Ayesha from endangering the universe. He's afraid the Infinity Gauntlet will destroy her soul.

Adam's music moves Jericho so much, both his souls briefly leave his body.

Janet asks Adam to write a song about her and Tony being besties.

Adam suggests Bucky create a band with him. Bucky comes up with the band name 'Winter Warlock'.

Adam is voiced by Lucas Schuneman.

Adam Warlock Rank 3
Add a photo to this gallery 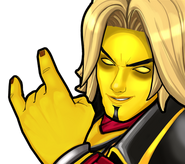 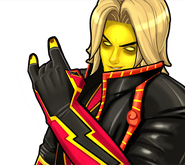 Adam Warlock Rank 5
Add a photo to this gallery
Retrieved from "https://avengers-academy.fandom.com/wiki/Adam_Warlock?oldid=59635"
Community content is available under CC-BY-SA unless otherwise noted.