A former evil A.I.M. henchman turned good, A.I.M. Scientist, civilian name Barry, is a character you could first recruit to your academy during the Return of A-Force Special Event. His Recruitment Quest was Get A.I.M. Scientist! His mission board quests can be found here.

A.I.M. Scientist was never released for combat in Avengers Academy 2.0.

A.I.M. Scientist's Rank 1 outfit is a black and yellow tracksuit. The jacket zips up high enough that the collar covers the lower half of A.I.M. Scientist's face. He also wears black gloves, black boots with yellow laces, and glasses with black frames.

A.I.M. Scientist used to be a henchman for A.I.M. Since they were defeated, he's been living in the shrubbery of Avengers Academy.

Iron Man asked A.I.M. Scientist to sneak into A.I.M. headquarters and steal the schematics to their new, planet-destroying weapon. He successfully infiltrated A.I.M., stole the schematics, and developed a computer virus to exploit a vulnerability in the weapon. Then he teamed up with Ms. Marvel, Miles Morales, and Wiccan, to infect the weapon with the virus, ultimately destroying it.

Ant-Man and The Wasp Event Edit

A.I.M. Scientist snuck into A.I.M. to figure out what they knew about Ghost's phasing problem. He discovered that she's stuck in a state of quantum superposition - both here and not here at the same time.

A.I.M. Scientist infiltrated A.I.M. to steal any data they had on Ghost's glitching condition.

A.I.M. Scientist apologized to M.O.D.O.K. for not helping him when he was a prisoner at A.I.M. In exchange, M.O.D.O.K. apologized to him for psionically messing with his controller during gaming competitions.

New Character! A.I.M. Scientist
Add a photo to this gallery 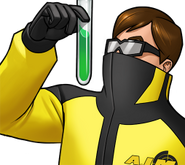 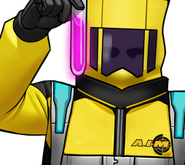 A.I.M. Scientist Rank 5
Add a photo to this gallery
Retrieved from "https://avengers-academy.fandom.com/wiki/A.I.M._Scientist?oldid=59636"
Community content is available under CC-BY-SA unless otherwise noted.