Introduced as a mind-controlled foe of Avengers Academy, A-Bomb, civilian name Rick Jones, is a character you could first recruit to your academy during the Gamma Attack! event. His Recruitment Quest is Final Fight, Pt. 2. His Mission Board Quests can be found here.

A-Bomb was never released for combat in Avengers Academy 2.0

A-Bomb's Rank 1 outfit is tan pants with an orange belt. He has sunglasses on his forehead and some bracelets on his right wrist.

A-Bomb's Rank 3 outfit shows some wear and tear to his Rank 1 outfit. The pants are shredded at the knees, and he's lost the bracelets and sunglasses. He has black spikes coming out of his shoulders and forearms.

A-Bomb's Rank 5 outfit doesn't include any clothing. The black spikes on his shoulders are more prominent, his kneecaps are covered with black armor, and his hips have short black spikes. He also wears black bracers on his forearms.

When the Leader attacked Avengers Academy, he controlled A-Bomb and Red Hulk's minds to help him take over the Academy. Iron Man, Wasp and Loki defeated him and successfully broke his mind control over him. After that, A-Bomb joined the Academy as a full-time student.

After joining the Academy he was approached by Black Widow. She contacted him to help her with further exploration of the timefog. A-Bomb joined Black Widow because he wanted to see if the Hulk was trapped or not.

Later, both he and Red Hulk scared the Leader off.

A-Bomb states that Hulk was his best friend and later tries to find out more about the timefog to free Hulk.

Iron Man battled A-Bomb to help break the Leader's mind-control over him. Iron Man later tries to have "fun" with A-Bomb.

Loki battled A-Bomb to help break the Leader's mind-control over him. Loki later hangs out with A-Bomb.

Wasp battled A-Bomb to help break the Leader's mind-control over him.

After A-Bomb was freed from the Leader's mind control, he worked with Black Widow to find out more about the timefog and how to free Hulk from it.

A-Bomb is voiced by Josh Keaton.

A-Bomb and Red Hulk on the news

A-Bomb waiting around on The Leader's ship during the Gamma Attack! Event

Mind-controlled A-Bomb with The Leader 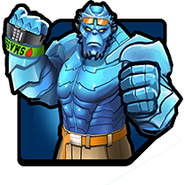 СombatIcon
Add a photo to this gallery 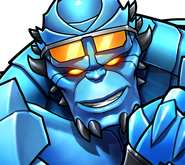 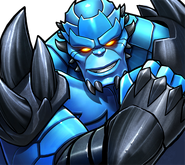 A-Bomb Rank 5
Add a photo to this gallery
Retrieved from "https://avengers-academy.fandom.com/wiki/A-Bomb?oldid=59637"
Community content is available under CC-BY-SA unless otherwise noted.